The topic of this page has a wiki of its own: ABC Wiki 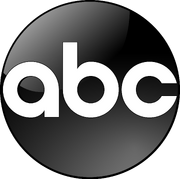 The American Broadcasting Company (ABC) is an American commercial broadcast television network that is a flagship property of Walt Disney Television, a subsidiary of the Disney Media Networks division of The Walt Disney Company.

It is the host network of Emergence.

Retrieved from "https://emergence.fandom.com/wiki/ABC?oldid=1967"
Community content is available under CC-BY-SA unless otherwise noted.