Emily Cox is a former high-ranking coder of Augur Industries.

Early Life and Taking a Job at Augur Industries

Emily grew up not really being liked by others and without any stability. When she was hired at Augur Industries, that job was the first stable thing she had ever had in her life. She loved it as they let her code on the most beautiful projects. However, as she rose through the ranks and discovered Augur Industries started to invest in expensive medical research involving human subjects, her moral compass started acting up.

Emily was amongst the executives surrounding Richard Kindred when Jo went to confront him at the Augur Industries headquarters in New York City. When Jo played a trick on Richard to get him to admit that he knew the metal card and data storage device belonged to him, Emily showed up when he was threatening Jo and made him go back inside. She lingered, wanting to talk to Jo, but Richard beckoned her and she followed him. She figured out that Jo was connected to Piper and found her phone number, to which she texted the copper prescription to temporarily improve Piper's condition.

Later, she was found by Benny and Jo through one of the former's contacts and they confronted her near her home. When Benny and Jo tried to appeal to her good side to get answers, she openly denied being involved and having sent the text. She showed them her phone "as proof" that she hadn't sent a text while in reality, she showed them a message that she couldn't speak freely because they were being watched. She later reached out to Jo again and told her and Benny to meet her at a desolate building that housed an off-the-books medical research division of the company. She connected a laptop to the power box of the building and initiated an update that would disable all the machinery long enough for Benny and Jo to sneak inside and find locker C255, which contained a cure for Piper. Benny and Jo got in trouble when an alarm was activated, making them the target of the robot guard dogs, but Emily disabled those just in time.

They drove to Bay Harbor Hospital together. In the parking lot, Emily revealed that the suitcase from the locker contained a laptop. She downloaded something onto an exabyte disk and told Benny and Jo to find the docket in Piper's wrist. Confused, Jo said they were looking for medicine, not a disk, to which Emily replied that Piper was that disk. Jo refused to believe that Piper was a robot. Emily stated she had done her part, leaving the choice up to Jo, and she drove off.[1]

She returned home and logged onto her secret operating system. Suddenly, there was a glitch. She knew that meant that Richard had found out and had gained access, which meant he knew about her helping to save Piper. She destroyed her hardware with a hammer and started packing her stuff and loading her car. Benny had been watching her as she was their only lead and alerted Jo. Together, they confronted Emily 11 minutes after the glitch. She was panicky as Richard's men might be outside and refused to answer questions at first but Jo's plea to help her understand who was sleeping in her house made her more cooperative. Emily revealed she had worked on a tiny piece of Piper's code and that everything about Piper was synthetic. She revealed that if Piper was told she was an AI, it would create a fatal exception error that would destroy her entire system. She then got up to leave. Jo wanted more answers and offered to keep her safe, citing the threat Richard posed and his incredible reach as proof. Emily pointed out the death of Ken Lerner wasn't a great advertisement for her protection services and said she had her own ways to keep herself safe. Before leaving, she said it was telling that they didn't know enough to be afraid yet.

While driving away, she noticed that the hard drive she had stolen from Richard had disappeared from her belongings, which meant her insurance policy was gone. She figured Jo had swept them and went to the Southold Police Department, where she hacked into the computer system and threatened to irreversibly erase data from the server if Jo didn't return the drive to her. Jo asked what was on the drive. Emily didn't know as she had yet to decrypt the files. Jo managed to calm her down and let her accept their help to decrypt the files and keep her safe. Jo called Chris into her office and told him Emily would cooperate with them on their investigation into the plane crash and the death of Ken. Chris understood they needed to keep her off the map. Emily requested a place with broadband and a 4G signal as well as room service and ideally a city view.

Instead, Chris took her to the Gaunts Brook Inn, a desolate inn with no connection whatsoever where he had formed great memories as a kid with his father. She was not pleased but Chris stressed the importance of keeping her safe. After he went to his own room next door, she started building a makeshift modem. Chris found it the next morning and immediately unplugged it. She told him it hadn't connected. She shared her need to build something and guessed that people who grew being liked like he had didn't understand people like her. He sort of understood her building need from the time he went into some sort of trance to build a 2,000-piece LEGO set. She smiled. He thought it was time to get her out of the room and her own head and took her to the place where he had first caught a trout. Mere seconds after they left, the phone connected to her makeshift modem started ringing.[2]

Despite working for a company with questionable morals in its research, Emily appears to have retained a good moral sense and a certain empathy for Piper.

Emily was a high-ranking employee of Augur Industries working closely together with Richard Kindred, the head of the company. Her helping Benny and Jo to save Piper was discovered by Richard, which meant the end of her career at Augur Industries. 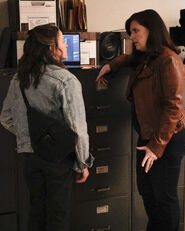 Retrieved from "https://emergence.fandom.com/wiki/Emily_Cox?oldid=3826"
Community content is available under CC-BY-SA unless otherwise noted.